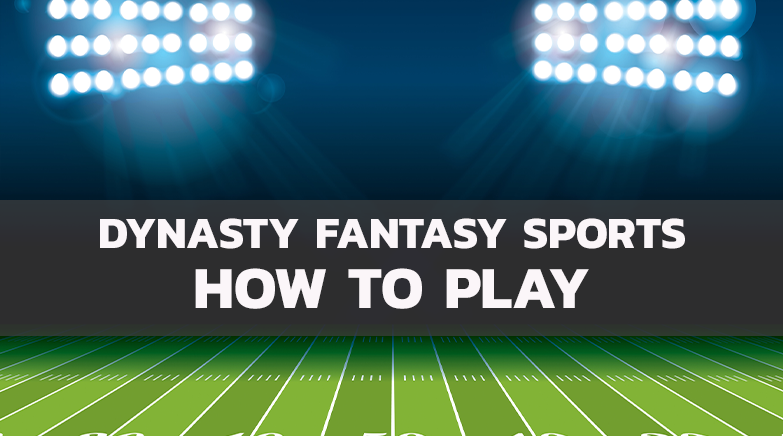 Fantasy Sports has a long tradition in the sports world. Ever since the late 20th century, people have been enjoying the game within the game that is fantasy. However, with the explosion of the internet and services available, fantasy sports, especially fantasy football, have become an integral part of the game.

As more people get into fantasy sports, the game has become larger, and that includes in the variety of ways to play. You now have daily fantasy alongside season-long fantasy games, meaning that you no longer have to commit to the long-haul and instead can play in quick games where your lineup is only for the day or week.

However, today were are going to be talking about the opposite end of the spectrum: Dynasty fantasy sports. This is a way to play season-long fantasy that is much closer to how actual teams in your favorite sports are constructed. In fact, I would not even call this season-long fantasy, as it often is a 5+ year commitment and is intended to be a lifelong one.

There are several variations of dynasty, including salary, empire leagues, and more. However, the one thing that combines all forms of dynasty fantasy leagues is the fact that, for the most part, the team you draft stays with you through your entire lifetime as the fantasy manager. Similarly to an NFL roster, if you draft a player, that is your player for however long you choose to keep him.

This is a way of playing fantasy for those who love the sport and love the roster construction aspect of the sport. Every one of the trades and roster moves you make will impact your team and the league for years to come. This also makes age a very important factor in decision-making. Will you take a young QB who is proving himself but can be a cornerstone of your roster for 15 years, or will you take Tom Brady and the couple of seasons he has left in the tank.

The one way you really build your team out is through the rookie draft that is held every year. This is common for all dynasty leagues, and it is how you add players to your squad. Many leagues take similar approaches to real-life leagues, where the worst team gets the best rookie pick, and there is no snake. This way, the draft helps balance out the power of the league.

What to Expect When Playing Dynasty Fantasy Sports

As previously stated, you need to be willing to commit to the league for several years if you are joining a dynasty league. Dynasty leagues are hard to fill because you need to get a player to inherit someone’s entire roster. This means that you should be committed, and if creating a new league, you should look for committed fantasy players that you know and trust.

The biggest thing that you need to prepare for is a multi-year rebuild. Now, it happens, you can get unlucky in a startup draft, where your team is just flat out not competitive. You can also just have a team that kind of falls apart due to age or injury. While this is not ideal, you have to be ready to focus on the future. This is something that turns off some players to dynasty, while at the same time what is extremely attractive about dynasty to others.

The way you re-build your dynasty team is by trading your valuable or older players for rookie draft picks and younger talents. It is trading the win-now guys for the future. This is how you set yourself up for a dominant several-year run where you are competitive, and then all of a sudden, you are trading younger players and draft picks for win-now guys. This is dynasty, and there are ebbs and flows to each team for years and years.

While I am going to use football, just about every major fantasy sport can be played in all of these kinds of leagues when it comes to dynasty.

Normal dynasty is what we have talked about. Your roster is going to be larger 25-30 players for a fantasy football squad. Your players are your players forever until you cut or trade them, and the primary way to build your roster is through the rookie draft.

This dynasty resembles normal fantasy the most, as in you select a starting squad each week, you have waivers each week, and everything is pretty much the same except the roster construction.

Best Ball dynasty is starting to become more and more popular. It is almost identical to a normal dynasty league except for how your team is selected each week. In best ball dynasty your score is determined solely based on the best starting lineup possible that week. This means that you do not select your starting lineup.

This has major implications for how to build your roster, as boom or bust guys are much more valuable. It is also very interesting to play as your rosters are so deep, but since anyone can be a contributor, the 24th and 25th guys on your bench are all of a sudden very important.

Empire dynasty can be played in combination with any of the other three mentioned. However, unlike a normal dynasty league, this dynasty league has an endpoint. Empire dynasty usually ends when a team has won 2 or 3 straight championships, essentially creating an “empire”.”This is a great way to play as the never-ending dynasty can be overwhelming for some. This creates a clear goal and endpoint that can be achieved in the league.

While the closest form to actual NFL roster construction, salaried dynasty leagues are also the most complex. In these leagues, your players will have a salary based on some sort of agreed-upon measure. Some use draft capital, and some use fantasy finishes.

This means that your team will have a salary cap or a max amount of contracts to keep a hold of. Each roster move is much more complex with the salary and contract aspect of the construction. This is a very intensive form of playing but can be very rewarding.