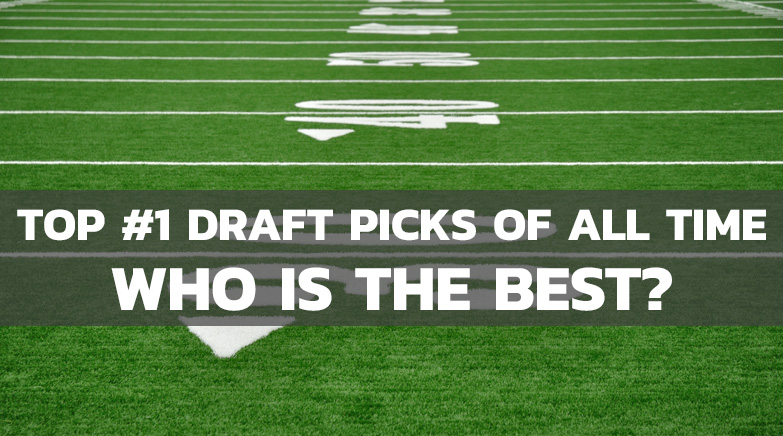 There is a lot of pressure that comes along with being a number one overall draft pick. We have seen a majority of these picks go to the quarterback position, which is expected to be the cornerstone of the organization for the next 15+ years. That likely ends up not being the case. However, for some of the worst picks, we have seen, there have also been some that really paid off. Time will tell on recent picks like Joe Burrow, Kyler Murray, and Baker Mayfield. We also have Trevor Lawrence who will be added to the list in a few weeks.

Luckily this isn’t the best rookie season article, as Peyton Manning threw 28 interceptions in his rookie year. Instead, he bounced back to become a Pro Bowler in Year 2 and went led them to a playoff appearance. After that, the story was written for one of the best quarterbacks to play the game. Manning won five MVP awards, two Super Bowl rings, and was the face of some of the best offenses we can remember.

Bruce Smith was not a popular number one overall pick for Buffalo when that day occurred. It drew a lot of pushback, but Buffalo certainly knew what they were doing at the time. He was a two-time Defensive Player of the Year award winner and was an All-Pro eight times. Oh, he also had 200 sacks to his name. Smith easily goes down as the best defensive first overall pick.

While we can sit back and argue about how the era plays into how we view quarterbacks and simply just how we view players, Terry Bradshaw was the first player to win four Super Bowl titles. He struggled greatly early on, but the Steelers stuck by him. Most quarterbacks were essentially game-managers, and while the stats are not going to make him one of the best picks of all-time, his success will. Having some of the best defenses of all time certainly helped that.

Taking a running back first overall would be considered a felony in this day and age, but back in 1978, the Houston Oilers drafted one of the best to ever play the position. He had nearly 1,500 yards as a rookie and nearly hit the 2,000 mark in Year 2. Campbell played in Huston from 1978-1084 before being traded to the Saints. His best years were by far in Houston, where he had multiple awards, including MVP.

Orlando Pace is one of the best offensive linemen to play the game. He was drafted by the Rams in 1997 and would go onto have a Hall of Fame career. Pace won a Super Bowl with that Rams team against Tennessee, and would essentially play his entire career with the Rams. Pace was named an All-Pro three times and went to seven Pro Bowls. He also played 169 games and started 165 of them.

Like many of the early quarterbacks, we know many more had better numbers later on. But the impact Troy Aikman can’t be knocked down. Jimmy Johnson and Jerry Jones rang in their legacy with Aikman under center. He went onto win three Super Bowls and played his entire career for the Cowboys.

This is a weird one because John Elway was originally drafted by the Baltimore Colts in 1983. However, he refused to play for Baltimore and was traded to Denver. Elway is certainly the most notable name in Broncos history, leading them to five Super Bowls and winning two of them. Elway would also win the MVP award in his fifth season.

Using a first overall pick on a lineman can be a big risk. Minnesota struck gold with Ron Yary, who played In Minnesota for 14 seasons. Yary was one of the most consistent players and was named All-Pro six times. He also won an NFL Championship. While the Vikings failed to capitalize on their four Super Bowl runs during Yary’s time, he was a big part of the consistent success.

The NFL is one of the most valuable sports leagues in the world. It brings in millions of dollars in revenue for each team. The expansion of the sport never seems to stop; year on year growth for each team has led to the NFL franchise becoming one of the most recognisable in the world. Video games, jerseys, memorabilia, films, tv documentaries and even casino games. Sites such as Royal Vegas Casino have had huge success in taping into this fan base and developing casino games based around football.

The NFL brings huge crowds in to every game. Monday night football generates huge revenue and Sundays are now football days in the US. However, there are two big occasions of every season, the draft and the super bowl. The NFL draft has always been a hot point of the season. The dramatic event can often lead to the difference of success or failure of the season. General Managers have an extraordinary level of pressure placed on the shoulders to bring in the best of the best. We wanted to take a look at the trades that didn’t go to plan. Here are our worst trades of all time.

Steve Largent vs Houston Oilers
Steve Largent is enshrined in the Pro Hall of Fame for a reason; he held a number of all-time receiving records upon his retirement. Though for all his potential, the Houston Oilers selected Largent in the fourth round of the 1976 NFL Draft before going onto trade him to the Seattle Seahawks. In return they received an eight-round draft pick thus the trade has been dubbed as  one of the worst trades the NFL has ever seen.

Jerome Bettis vs Lawrence Phillips
Jerome Bettis’s arrival to the Pittsburgh Steelers following his departure from the St. Louis Rams may rival Largent’s trade. In return, the Rams welcomed Lawrence Phillips. Their decision to get rid of Bettis following two 1,000 + yard rushing seasons in his two debut years in the league was always seemingly bizarre. Phillips was condemned to a life of crime and was subsequently arrested multiple times. Isn’t hindsight a wonderful thing!

John Hadl
It’s never a wise decision to panic-trade, no matter how badly things are going, and now unfortunately, that is something the Green Bay Packers know all too week. It was 1974 when they failed to hit the ground running and struggled to a 3-3 record to start the season. Head coach Dan Devine felt he needed to act and decided a change at quarterback was his side’s only hope of competing for a Super Bowl title. Two first rounders, two second rounders and one third rounder were traded away as a result and in came 34-year- old Los Angeles Rams player John Hadl. It wasn’t much of a surprise when the trade failed to work out. In his short time at the Rams Hadl managed a 7-12 record, throwing just six touchdown passes, with a mere 21 interceptions. Maybe Devine should have persevered with the players at his disposal.

Herschel Walker vs Emmitt Smith
Much similar to the Green Bay Packers, Minnesota decided to give up five players and a further eight draft choices for Herschel Walker and picks to Dallas. The deal went swimmingly for Dallas as their biggest success story from the trade was that of Emmitt Smith. The Hall of Famer became the league’s all-time leading rusher during his fifteen seasons, meanwhile Minnesota were left with an expensive Walker who ultimately failed to do anything too much of note during his career. Not in comparison to Smith anyway.

Steve Young
Youth can often to prove to be frustrating in sport; their lack of experience but sheer potential is always a weighty dilemma. Though the Tampa Bay Buccaneers now realzse that potential is worth the wait. In 1997 the Buccaneers decided they had no time to waste in waiting for Steve Young to flourish and sent him to San Francisco for second and fourth round draft picks. I doubt there’s a trade that the Buccaneers regret more as Young developed into one of the best talents the NFL will see. In time he went onto to replace the legendary Joe Montana under centre and led the Niners to the 1994 Super Bowl. Young now has his very own place in the Pro Football Hall of Fame.

Just because you’re a top athlete in one sport doesn’t mean that you don’t enjoy another one. In fact, many of the best athletes undertake alternative sports to increase their stamina, performance and create some variety in their training schedule.

Even after they have left their main sport behind these alternatives can be a great way to stay fit. If you’re ready to join them you can start cycling with the aid of an electric bike and build up to more strenuous opportunities.

What you may be surprised by is the number of NFL Legends who love cycling:

Greenway is currently the second leading tackler for the Minnesota Vikings. However he cycles as much as 60 miles a day in the off season; to assist his training. The fact that he loves cycling is simply a bonus.

It is worth noting that he rarely actually cycles 60 miles; he usually aims for between 20 and 40 to prevent burning muscle.

Cycling is a great interval training sport; simply pedal gently until you find a hill and then cycle up it as fast as you can. You can then rest on the flat and the down hills until the next one. This mimics the way his body needs to respond in a game.

This Philadelphia linebacker rides to work every day on his bike. It may only be 3 miles but his consistency helps improve his stamina; as well as competing with his own time every day.

A motorcycle accident in 2005 could have put this tight end out of the game but a stationary bike helped him to rebuild his strength and stamina.

Since then he developed a love of cycling and now h rides between 30 and 40 miles per day. He is even considering a comeback to the game after a 4 year break!

The Falcons have a general manager that loves to cycle. He has even led a group of 50 cyclists on a 17 mile ride round the toughest streets of Atlanta. He is enthusiastic about getting the team to ride to and from work. But he is also realistic, knowing that you need a passion for cycling to really make it work.

He’s certainly in good company as Matt Bryant, Matt Ryan and Julio Jones are already keen cyclists in their spare time; perhaps the Falcons will be the first all cycling NFL team!

It is important for these NFL athletes to get the right balance between a love of cycling and their need to be match fit. Long distance cycling is a cardio activity which will burn fat. However, these guys don’t generally need to burn excess fat.

Long distance training is also likely to reduce the energy and time available for strength training. As an NFL player you need strength and mass so no matter how keen they are on cycling these NFL players need to balance their budding cycling careers against the demands of their current sport.